“ALL ABOARD!” These words certainly take us back in time to the early days of the steam locomotive. Many may remember the picturesque movie scenes where the conductor is checking his pocket watch and shouting out those famous words, “All aboard!” while passengers scramble to get on board before the train departs the station. Have you ever wondered why the conductor is constantly looking at his pocket watch?

Time is of the essence when working with the railroad system. Just a matter of a few minutes can create an engineer’s worst nightmare. In fact, in 1891 there was a fatal crash that was caused by the train engineer’s watch stopping for four minutes. The loss of those four minutes proved to be very crucial and took the lives of nine people in Kipton, Ohio, when two trains collided. In the earlier days of railroading, trains ran by strict time and timetable rules and as you can see with the loss of just four minutes, it proved to be very disastrous.

Soon after this collision, the General Railroad Timepiece Standards were adopted to be used by all railroads. The new standards guidelines included the following: the watch must be open faced; size 18 or 16; have a minimum of 17 jewels; must be accurate within a gain or loss of only 30 seconds per week; have a white face; adjusted to at least five positions; temperature compensated to withstand temperatures of 34 to 100 degrees Fahrenheit; winding stem at 12 o’clock; grade on back plate; and use plain Arabic numbers printed bold and bold black hands.

After these new standards were adopted, it was required that all engineers, conductors and workers have their watches inspected regularly and submit a certificate stating its status to supervisors. In some instances railroads had their own Timekeepers Office who was responsible for servicing and inspecting the watches. Many times, this was the only approved source for watch inspections and servicing used on specific railroads. Some of these requirements may have changed since the 1800s, but still today railroad workers must have accurate watches and are subject to inspections at any time.

One might ask why was it so important for railroad watches to keep accurate time? In earlier days, trains ran on a time-interval system. A train was required to leave the station a certain number of minutes behind an earlier train moving in the same direction. Single-track routes were operated on the basis of a timetable and if one train was delayed, this meant all trains would be delayed. To keep this from happening, it was imperative to have accurate timepieces. 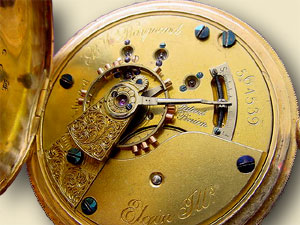 The first watch commissioned by a railroad company was the Elgin “B.W. Raymond”, made in 1867 and named for the founder and president of the company. This was an 18 size, 15 jewel, and full plate with straight line escapement watch. When first introduced this watch sold for $115, but in 1987 it was auctioned off by Christie’s in New York for $15,000. The watch is now on display in the Elgin Civic Center in Illinois.

By the late 1880s most of the railroad approved watches were changed over to stem-winders and with the adoption of the new standards in 1893, most of the watches in use were obsolete and no longer acceptable to use by railroad workers. Manufacturers soon saw the need to produce high-grade railroad watches that followed the guidelines of the General Railroad Timepiece Standards and in 1892 Hamilton Watch Company was formed specifically for that purpose. Their first high-grade railroad watch was introduced in 1893 and not only fulfilled the railroad’s need of an accurate timepiece, but also the general public’s need for a high-quality timepiece. Hamilton Watch Company soon became known as “Hamilton…The Railroad Timekeeper of America”.

Today, you won’t find many railroad watches because everyone is into wristwatches. However, before the turn of the 20th century, wristwatches were considered “sissy” and not to be worn by men. Pocket or railroad watches were in style and in such great demand that pockets were made in suits just for the purpose of carrying one. But once World War II came along, soldiers in the field found it difficult to carry a pocket watch and soon saw the value of having a watch they could easily glance at. This of course led many men, especially soldiers, to wear wristwatches because they were found to be more convenient. Of course, during this time pocket watches still remained popular with the railroads. 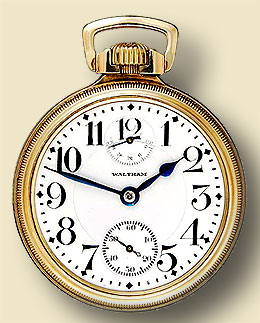 Many collectors are fascinated with the railroad pocket watch although many of the watches are very plain. The railroad watch is among some of the highest quality watches ever produced. Although many watch companies made railroad watches, they were not highly produced as the everyday pocket watch. Men, women, young and old are captured by the spirit of the rails and this is what inspires a collector of railroad watches. Most generally they are very affordable, take up very little room and the beauty of the craftsmanship and history of the watch makes them a great collectible.

Mintz noted that while some may prefer one manufacturer over another when it comes to railroad watches, “the truth is that any of the manufacturers were capable of making very high quality watches and most of them did. This is a matter of personal opinion and preference.” Most people, according to Mintz, buy railroad watches as collectibles, gifts and sometimes to use on a daily basis. “This is either because they don’t like having a watch on their wrist, or as a fashion statement,” he said.

Mintz finds that it is mostly men who purchase and collect railroad watches but occasionally a woman may buy one as a present. “Sometimes they’re (men) connected with railroads (although they no longer need to use railroad pocket watches to work), and sometimes they are interested in the history involved with running a railroad using pocket watches instead of radios and electric signals. Whatever the case may be, railroad pocket watches are still in great demand by many collectors. “I believe it’s a combination of the lore of the railroads, the precision of the manufacturing and the shear beauty of the movements,” Mintz stated.

According to Mintz, many of the watch movements are highly decorated, and the companies often competed with each other based on the beauty of the movements as well as their time keeping abilities. “This is a bit curious when you consider that the railroaders weren’t actually allowed to open up their watches and look at the beautiful movement. All he was allowed to do was wind it and read the time. When it required setting, the railroader took it to an approved watch maker who would examine it and set it for the railroad worker,” Mintz stated.


Related Posts:
Railroad pocket watches
April 19th saw a fast mail train known as No. 4 traveling east on the same track as an accomodation train was going West. Unfortunately the engineer's watch on the accomodation train had stopped for 4 minutes, and then started up again. The two trains met their