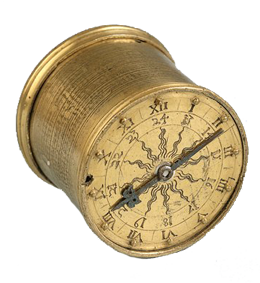 The first watches seem to have been made about the year 1500. About 1587, Watchmaking as an industry was introduced into Geneva, Switzerland by Ch. Cusin although a few watches had been made in Switzerland previous to that date. Enamel dials were invented in 1635 by Paul Viet, a Frenchman. The balance spring was invented in 1658.

Until 1687 watches had been made with only an hour hand but at this time the minute hand was introduced. However, the minute hand had been used in clocks as early as 1610.
About 1700, jewels as bearing for the pivots came into use. The compensating balance was first introduced in 1749.

About 1780 the second hand came into use.
The earlier watches were all hand made, each watch with its case presenting an individual problem.

In 1849 Aaron L. Dennison an American Watchmaker began to build machinery for manufacturing watches on the interchangeable system.

In order to do this successfully it was necessary to have certain standard sizes. Mr. Dennison has been credited with having originated the method for sizing that has become a standard for American manufacturers of watches. His system was based upon the English inch and thirtieths of an inch.
The first watch made by Mr. Dennison and his associates of the American Horologe Company was 18 size and this size was determined by taking one inch and adding 6|30 of an inch for “fall”, then each additional l|30 of an inch formed a size. Thus the 18 size watch would measure one inch, plus 6|30, plus 18|30 which equals one and 24|30 inches the full diameter of the watch measuring on the pillar plate.

This so called allowance for “fall” was borrowed from the English. The English Watch Movements were usually hinged to the cases as shown in the Old English Verge in figure 4, and the top plate indicated by the arrow D was made enough smaller in diameter to permit the movement to fall or drop into its position in the case without striking. 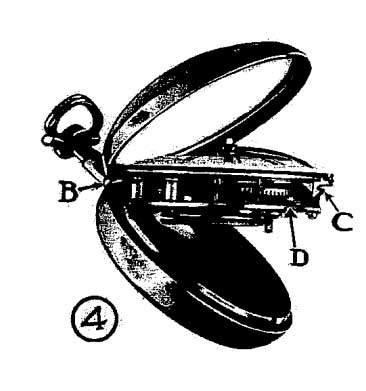 This first factory was started in Boston and in 1854 was moved to Waltham, Mass.

Some idea of the wonderful strides that have been made, can be obtained when we learn that in 1854 this factory was employing ninety hands and making about five watches a day.

Today by means of improved methods and automatic machinery some of which almost seems human in Us work, one of the leading factories has a capacity of over 4500 watches a day, while employing over 4000 people.

The Swiss manufacturers lagged behind the American in their adoption of automatic machinery and the making of interchangeable parts. It has been but a comparatively few years since it was no uncommon tiling to find in the same Swiss watch, train bridge screws of different sizes — even different pitch of thread.

It was customary in taking apart these older Swiss movements to have a “screw stand”, consisting of a round plate drilled with a series of holes into which the workman placed the screws in the order in which he removed them so that when he assembled his watch, the screws could be replaced in their proper holes without confusion.

In the modern Swiss watches as made by the leading factories this fault has disappeared and the factory material is now on an interchangeable basis, making it possible to get material and parts for these watches as well as for American. As the interchangeable feature of Watchmaking came into its own, the manufacture of cases came to be independent of the Watch factory, so that today the manufacturing of cases is an entirely different industry from that of manufacturing watch movements.

The older pocket watches were cased in double cases consisting of an inner and outer case. In figure 5 is shown an old English Verge movement in such a pair of cases.

The outer case closes with a snap fit and is opened to the position shown at figure 6 as we would a modern snap case. The inner case containing the movement fits into this outside part and can be lifted out as in figure 7.