Using a Screw Driver. Use Tweezers

In some of the older style cases for lever set movements where there is no sleeve, you will find a screw in the pendant of the case at a point indicated by the arrow C figure 21 – which fits in a slot in the stem, thus holding the stem in proper position. In such a style case it is necessary to back this screw out far enough to allow the stem to be withdrawn from the case by means of the crown and then it is an easy matter to slip the movement out.

At times where the screw is difficult to start some prefer putting the bead of the screw driver in the palm of the hand and using the first and second fingers on one side and the thumb on the other to secure a little more leverage in turning.

Use Tweezers When Handling Watch Parts 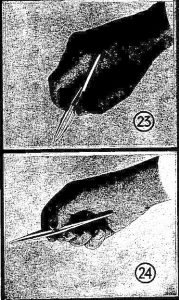 Use the proper size screw driver and turn each screw D and E figure 21 until it is entirely free. Then with your tweezers lift each case screw out and place in your material tray.
The most common and natural way of holding the tweezers when manipulating any small object is as shown in figure 23. Here you can see the tweezers are held in much the same way that a pencil is held in writing. One side rests upon the second finger while the pressure necessary to hold an object is applied by means of the thumb and first finger.

Sometimes where more force is necessary as in pulling at some part that has become stuck, the tweezers are held inside the hand as shown in figure 24, the pressure being applied by means of the first and second fingers on one side and the thumb on the other. It is also more convenient at times, to handle the tweezers this way in holding small objects than as first described. Practice each method and you will soon find yourself using the one that is best adapted for the work you are doing.

Nearly all beginners use too much pressure on the tweezers. Use only enough to maintain the necessary grip when picking up or placing any watch parts or material. By using unnecessary pressure there is always danger of snapping the piece out of the tweezers.

At first it will seem awkward to handle small objects in this manner but with practice it will come easier until finally you will have no trouble in manipulating the smallest parts with tweezers.