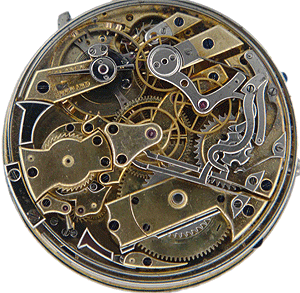 Repeater is optional clock mechanism, which allows you to watch a battle of different melodic tones to inform the current time. The complex mechanism, usually indicates a clock, quarter hour and minute. Each fight has its own melody, and frequency.

The invention of this mechanism, we are obliged to darkness. Indeed, before the invention of fluorescent dyes have been extremely difficult to determine the time in the dark. The first repeater were made for the needs of people who had to travel a lot, including at night. Today, the production of repeating shows the tops of skill watch companies. 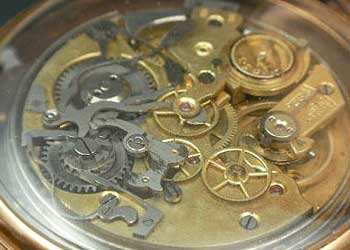 When you click on the left side of the watch (usually the opposite of figure 9), different types of repeating produces a variety of signals: Time emit a sound for each 1/4 of hour repeater sound one tone every hour and a lower tone every quarter of an hour the clock strikes five-minute repeater, a quarter and five-minute periods; minute repeater clock strikes, quarters and minutes. Gavel and calls to the Repeater (except time) are arranged in such a way that sounds the hours and minutes had at least two contrasting colors. For example, at 5:23 five-minute repeater one tone five times bet the clock, and then another tone four times bet five-minute intervals, 1/4 of hour repeater bet five times the clock and one fifteen-minute interval.

A quarter hour repeater is now producing two firms – Audemars Piguet and Kelek. An interesting fact is that 1/4 of hour repeater costs about three times more expensive than five minutes from the same manufacturer. It is, moreover, that the technical parameters of both mechanisms are almost identical. This is most likely that the five-minute repeater appeared more 20 years ago, when labor was cheaper, and sold these watches is quite a lot. 1/4 of hour same repeater has been developed recently specifically for the company Kelek.

Hours Grande Sonnerie spend more energy compared to conventional repeater, so the automatic battle do you want to disable.

Among the most tuneful repeating recognized Carillon – repeater, which has a quarter of an hour kicking three or four bells of different pitch. Typically, this function has been implemented in pocket watches. For the first time wristwatch with repeater Carillon were made by Audemars Piguet – model “Jules Audemars Grande Sonnerie Repetition Minutes Carillon”. The model has two variations – Grande Sonnerie and Petite Sonnerie with a power reserve of 20 and 60 hours respectively.

Jaquemart – another kind of repeater. Jaquemart – a small figurines (usually Hammers), moving when the repeater beats time. Figures move in such a way that gives the impression that they emit a sweet fight. Situated figures usually on the dial. One notable example is the clock “San Marco Jaquemarts Repetition Minutes” by Ulysse Nardin, where the figures on the dial copied figures on the tower clock of St. Peter’s in Piazza San Marco (San Marco) in Venice.

It should be noted that the repeater are more collectors than utilitarian, and their cost is much higher than the cost of many difficult timepieces. For example, repeater Grande Sonnerie by Gerald Genta, were released in the amount of nine pieces were sold for 1.2 million Swiss francs for each.